The UCSB Department of Art Visiting Artist Colloquium features nine synchronous Artist Talks that are scheduled each Thursday evening from 5:00-6:50 (March 31st through May 26th) in UCSB’s Embarcadero Hall in Isla Vista (unless on Zoom). All lectures are free and open to the public. For directions to location, please see this campus map.

in conversation with Victoria Jennings 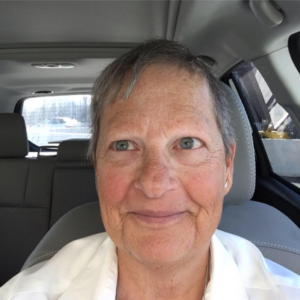 In my work I strive for visual and conceptual richness, pleasure and perspicacity. I favor uncertainty and humor over conventional structures. In the work “stuff happens”, and is accessible through visuals and sound, though definition is suspended. There is the assumption that everything is sentient, related to philosophy of mind’s idea of panpsychism- the view that a mindlike aspect is a ubiquitous feature of reality. This gets interesting as it breakdowns between experience and cognition. As an apophenia enthusiast (the tendency to perceive meaningful connections between unrelated things), absurdity, play, and affective montage are valuable tools in the face of consequential themes and times. For me, truth is fugitive, fiction is powerful, and not-knowing- trusting curiosity and process, are key. Born in Hawaii, raised in California; city, beach, flora and fauna lover, I’ve been involved in digital technologies as an artist since the mid-80’s when I was teaching (and running the Graphics Laboratory) at Cal Arts (1984-94). I have a background working with projected light and as a printer; moving from print to electronic multiples to video. I also attended Cal Arts as a student (BFA 74, MFA 76), and was involved with the Woman’s Building later on: both experiences acutely formational. I’m a hippy with a critical streak, so queer, and I notice a darkness in my projects. My work tangles with affect, stage & screen space, metaphysics, alterity & consciousness; and has screened in festivals, public spaces, museums and galleries throughout the US and abroad in over 30 countries. I am delighted to share my work with you. 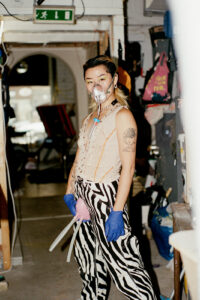 Mary Maggic (b. Los Angeles, ’91) is a nonbinary artist working at the intersection of hormones, body and gender politics, and ecological alienations. Maggic frequently uses “biohacking” as a xeno-feminist practice of care that holds the potential to demystify invisible systems of molecular biopower. Completing their Masters in the Design Fiction group at MIT Media Lab, they received the Prix Ars Electronica Honorary Mention in Hybrid Arts (2017) for the project “Open Source Estrogen” and a 10-month Fulbright research award in Yogyakarta, Indonesia (2019). Maggic is a current member of the global network Hackteria – Open Source Biological Art, the tactical theater collective Aliens in Green, the Asian feminist association Mai Ling Vienna, as well as a contributor to the radical syllabus project Pirate Care and to the online Cyberfeminism Index.

Co-presented with the Museum of Contemporary Art Santa Barbara 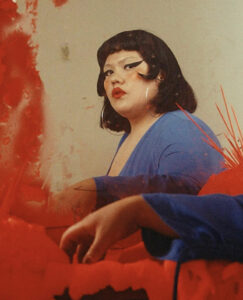 Ruiz is a self-taught artist whose practice blends diverse forms of expression and media, including sculpture, video, painting, and apparel design. Within her work, she uses a variety of color palettes to create vivid and vibrant environments that function as installations, settings for performances, or as backdrops for fashion shoots. Her sculptures incorporate found objects and industrial materials, such as thrift store furniture and insulation foam, and investigate ideas of home and self and our relationship to environments around us. Strongly influenced by growing up in LA’s San Fernando Valley to immigrant parents from Mexico, Ruiz’s practice is a reflection of the DIY work ethic she was raised under, the vibrancy of Mexican cultural and artistic traditions, and her exposure to subculture and fantasy at a young age as a means to escape the realities of daily life. 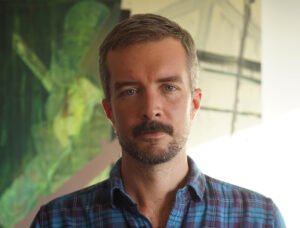 Michael Robinson’s collaged films explore the emotional mechanics of popular media, the nature of heartache, and the instability of the reality we inhabit. His work has shown internationally at venues including London’s National Portrait Gallery, The 2012 Whitney Biennial, MoMA, Walker Art Center, The Austrian Film Museum, Whitechapel Gallery, REDCAT Los Angeles, RHA Dublin, and MMCA Seoul, and has been regularly included in major festivals like Rotterdam, New York, London BFI, Berlinale, Hong Kong, Cinéma du Réel (Paris), and Toronto. Michael’s work has been supported by Teton Artlab, FIDlab Marseille, a MacDowell Fellowship, a Creative Capital grant, a Wexner Center Artist Residency Award, a Kazuko Trust Award presented by The Film Society of Lincoln Center, a residency from The Headlands Center for the Arts, and his films have received awards from numerous festivals. His work has been discussed in publications such as Art In America, Frieze, Artforum, Film Comment, Cinema Scope, Dazed, The Nation, BOMB, The Irish Times, and The Brooklyn Rail.  He lives in Los Angeles and currently teaches in the School of Film/Video at CalArts. 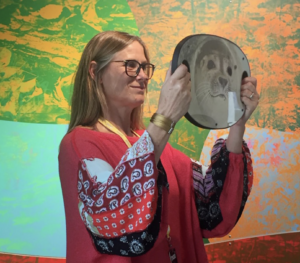 I am an artist and professor of art at UCSB. After years of visualizing the expressions and exchanges created by the protocols and languages of the Internet, I applied my understanding of these unintentional collaborations to exchanges with animals of other species and their experiences of the world around them. In Interspecies Collaboration I invited students to collaborate with individuals of other species, and my iOS app Zoomorph simulates how non-human animals see. I am currently mapping natural and ‘un-natural,’ environmental, cultural and spiritual ecosystems of islands using wool from endemic sheep breeds and dye from invasive plant species. Muddling accepted scientific epistemologies with alternative ways of knowing, Intelopings – Experiencing the warp and weft of ecological entanglements, is a data mapping of invasive species, investigating the chemistry of color and plants and an alchemical witchcraft of sorts, tapping into the plants rich history of magical and medicinal use.

My work has been exhibited internationally in venues such as The Walker Art Center (Minneapolis), Banff Centre for the Arts (Canada), The New Museum (New York), The Swedish National Public Art Council (Stockholm, Sweden), Centro Colombo Americano (Bogota), Somerset House (London), Miniart Textile – International Fibre Art Exhibition (Como, Italy) and the Whitney Biennial at the Whitney Museum of American Art (New York). It is discussed in numerous books, for example “Internet Art” by Rachel Greene, “Digital Art” by Christiane Paul and “Art + Science Now” by Stephen Wilson. I have also published texts about issues related to my practice, for example “Inquiries in Infomics”, a chapter in the anthology “Network Art – Practices and Positions” ed. Tom Corby (Routledge) and “Interspecies Collaboration, Making Art Together with Nonhuman Animals” in Tierstudien [Animal Studies] Issue 1 (Neofelis Verlag, Germany). My animal vision simulation app Zoomorph was created with the support of a Creative Capital grant.

Beatriz Cortez, IN PERSON, May 5th 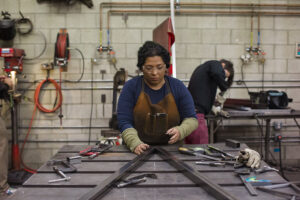 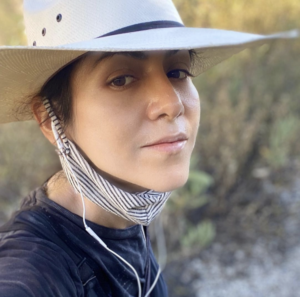 Carmen Argote is a multidisciplinary artist based in Los Angeles. Argote’s process-based practice is derived from her environment, often pointing to the body, to class, and to economic structures in relation to architecture and personal history. The act of walking and movement is an integral part of her practice and transforms the body into her studio. carmenargote.com

Marisa De La Peña is an interdisciplinary artist from Los Angeles, CA. Her work revolves around encapsulation, memory, ritual, colonialism, and horror. A sweet confection is more than just a treat, it’s a vessel of assimilated histories and dispossession. A gelatin is an ancestral offering for the ghosts that haunt her familial line.

Chad Ress is a photographer and artist working with image, text, video and sound as a means to explore political, economic and environmental processes. Often using legal language as a starting point, his projects explore a more visceral relationship to the government policies shaping our lives.

Tom Dunn started the MFA program painting large scale oil on canvas and is now working on a series of black and white acrylic on paper.  Tom is developing this series into an animation called Lunula.  The imagery in Tom’s paintings derive from the subconscious.

Victoria Jennings is a Ph.D. student in History of Art & Architecture and the current Murray Roman Curatorial Fellow and Internship Program Coordinator with the Art, Design, & Architecture Museum on campus. Her primary focus is on Ancient Greek and Roman artwork where she works with subjects of magic, witchcraft, mythology, female representation, and ancient cults. Currently her research is devoted to museum practices of housing and displaying human remains (bog bodies, mummies, skeletal, and tattooed tissue) along with NAGPRA related issues. 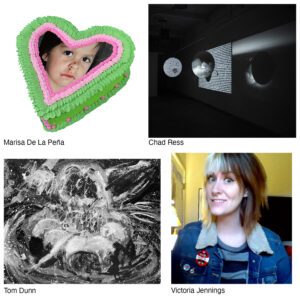 Jibz Cameron, IN PERSON, May 26th 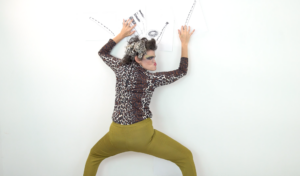 Jibz Cameron is a performer, visual artist and actor. Her multi-media performance work as alter ego Dynasty Handbag has spanned over 15 years and has been presented at arts venues such as The New Museum of Contemporary Art, The Broad Museum, The Hammer Museum, REDCAT, The Kitchen, BAM, Centre Pompidou among others. She has been heralded by the New York Times as “the funniest and most pitch perfect performance seen in years” and “outrageously smart, grotesque and innovative” by The New Yorker. She has written and produced numerous performance pieces, dozens of video works and 2 albums of original music. Jibz produces and hosts Weirdo Night, a monthly comedy and performance event in Los Angeles. She is a 2020 Creative Capital Grant awardee and a 2021 United States Artist Award recipient. She recently sold a short series to FX network titled Garbage Castle, which is on hold due to Covid. Her film Weirdo Night, directed by Mariah Garnett (a movie version of the live show) is a 2021 Sundance Film Festival selection. She lives in Los Angeles.